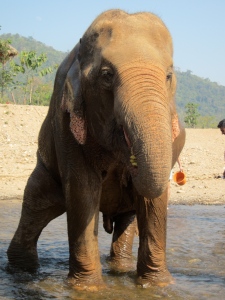 Thought you’d enjoy being introduced to some of the cast of characters that enchant visitors to Elephant Nature Park every day. The first is my personal favorite, her spirit in the face of such hardship and cruelty –  well she is an inspiration to everyone who meets her. Her name is Medo and was rescued by Lek in 2006. It took almost 4 months to raise the money and arrange transportation.

Medo was born around 1976 and started working in logging camps near the Thai/Burma border at the age of 8 for 4 years. When a large log fell on her and broke her back left leg her contract with the logging company was cancelled. The leg never properly set and to this day is evident. As a result she was taken from camp to camp but no one wanted to hire a lame elephant. 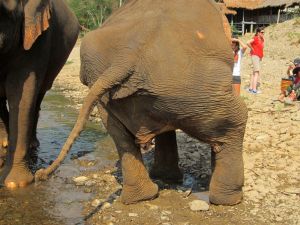 In order to get some kind of income out of her, Medo was used for breeding. They used the strongest bull, a tusker who was in musth, which makes male elephants go berserk. Medo was chained by each foot and rather than simply breeding her he savagely attacked her and pined her to the ground with his tusks. She screamed in pain but no one would risk going near a musth elephant. Medo tried and tried to get up and was left lying, bleeding and crying in agony alone. Vets determined her backbone had been dislocated.

With life-threatening injuries Medo fought for her life for 3 years. Then she spent 15 years isolated, induring tedious work. Her owners ashamed of her condition kept her hidden in an isolated village in the mountains hauling small logs until Lek found her in Feb. 2006. Seeing her, there was no doubt that Medo had to be rescued.

Working with Connie of Elephant Umbrella and Bert of the Serengeti Foundation, Medo finally arrived at the Elephant Nature Park in June 2006. 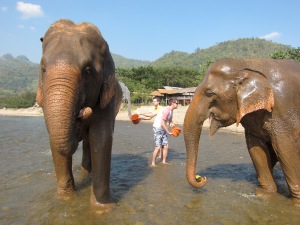 Medo, on the right, with her friend, Mae Mai.

On arrival Medo saw elephants for the 1st time in 15 years and as a result was very shy and there was a slow adjustment period. Finally a strong friendship was formed with Mae Mai, who became her protector. I have seen first hand her protectiveness of Medo. We were on a walk-around when Mae Mai felt her friend was in danger,  trumpeting and banging the ground with her trunk (a sure sign of warning) she placed herself between us and Medo. My advise, don’t piss off an elephant.

Today she is a well-adjusted and social elephant, whom people have seen actually running! I love her dearly and plan to help financially with her care.

ps: Just went down to the river to get some better pics of Medo and was fascinated  how Mae Mai was constantly shifting to shield her from the annoying little ants called humans. :}