Well “1” with a caveat, I caught the train, barely but it ended up 2 hours late and the air-con I paid extra for, died at about 2am. So I got the point but barely.

It really was such a cool experience, just not a comfortable one. I often mused on all the safety measures we have in North America accompanied by massive bureaucratic depts. This train would cause these people apoplexy. I booked a lower bunk, between my teensy bladder and the air-con dying, it was a very smart move. I can’t imagine how hot it was up on the top bunk, though the young woman above me didn’t poke her head out until 10am and that was actually her hand for a cup of tea from  the attendant. :} 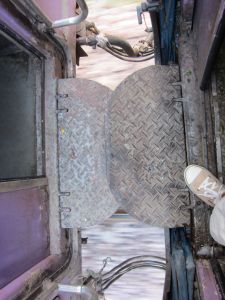 Safety? What safety? These were the plates between the cars.

I scooted through the cars to explore, hopping from car to car over the plates holding them togather as they moved. Finally I came to what I can only describe as the party car. Rock music blares until 3am and starts up again around 9. They serve food as well as attitude, the “maitre d” pushing people from table to table for optimum paying customers.. and if you aren’t spending enough money, well then, off you go. Absolute chaos. The first time I walked into it all I could do is stand there grinning. So gonzo! A Thai & farang soup on steroids!

Can’t you just smell the urine?

The bathroom experience leaved MUCH to be desired. I am not all that fussy when it comes to bathrooms having done long drops in Africa it takes a lot to rattle me. These rattled me, literally and figuratively. The train never, ever stops jiggling and swaying and since men have a hard enough time hitting a stationary target, you can imagine what happens with a moving one. Add to that women. It is ugly, ugly, ugly. Thank goodness for anti-nausea pills. I am gagging thinking about it. GAK.

My little cubby on the train.

While I only had 1 bag plus a back-pack it would seem that all I did was jam enough stuff for 2 bags into 1. The result was not being able to throw the freaking thing up into the baggage ledge, which was well over my head. So I got to sleep with it and the pack which made an ample space, not. (just look at that poor bag in the picture bulging at the seams) Air con off at 2 meant oxygen decreased significantly because we couldn’t open the windows. But I was impressed that first thing in the morning we were given a voucher for a partial refund because of it. 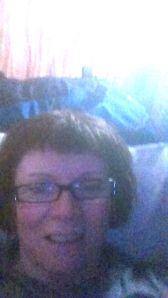 I have 2 more train rides in Thailand. Thought I had something amusing to say about that, but I don’t. I got nothing. I’m not going to think about that now. I have elephants, dogs, cats, horses, buffalo, geese….