Since Elephant Nature Park I have realized that I choose my holidays based on the desired experiences and not site specific. I chose Thailand last year, not because it was Thailand but because Elephant Nature Park was there and I wanted more than anything to volunteer with elephants. If it had have been in Moose Jaw, Saskatchewan… welllll… no no, I would have gone there too.  Honest. That realization went a long way in making my next trip choice much easier. I had thought of the Yucatan in Mexico since I have wanted to explore it for some time but going alone with no structure didn’t feel right. So I thought about what I wanted/needed out of this trip and then proceeded to track down accommodations that would support it. Now who knows if it will, that is the joy of internet travel planning. You can only go on one’s intuition, experience and what the web site looks like.

What I wanted was some down time, space to get grounded and try to make peace with my diagnosis. Even though it has been a few months, it has been so busy  I really ‘get‘ it yet. So I needed quiet, cheap, people around to socialize with but not crowded, beautiful, isolated but not so that it would take me 5 days to get there. Finally, after much trolling, I came up with La Iguana Perdida, Santa Cruz, Lake Atitlan, Guatemala. And when I read up on the lake I was sold.

Lonely Planet writes at the beginning of their introduction to the lake:  “Nineteenth-century traveler/chronicler John L Stephens, writing in Incidents of Travel in Central America, called Lago de Atitlán ‘the most magnificent spectacle we ever saw,’ and he had been around a bit.”

Aldous Huxley famously described this lake as, “really, too much of a good thing.”

Found this vid, that I hope represents the kind of folk I’ll be meeting there,  “The Chicken Bus” .

So Saturday I am off to see if Lake Atitlan lives up to it’s reputation. My plan is to do yoga, learn weaving, kayak, hike, swim. I’ve even played with the idea of getting my PADI. Or maybe lay in a hammock and do nothing but stare at all the different shades of blue and green in that world. Oh and there will be wine.

I am curious, how do you choose where you go on your trips? Is it because you have dreamed of gliding down the canals of Venice? The galleries of Paris? Or do you close your eyes and flip open an atlas and stick a pin in it? (I have always wanted to do that 🙂 ). 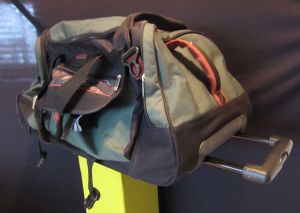 I am sooo not going to bother with dealing with carry-on this trip.

Mighty Mouse! – A favorite as a daily travel bag and I got a smaller laptop so it is coming! Yah!