I was going to do one of those top “10” lists (some of you may have gotten a rough draft of that post by accident 😦 ) but realized it was going to be way too much for one post. So I’m going to give you a few at a time. These two are my top pick… well that spot moves around LOL, when I write the next one it might change.

Early morning, the air is crisp and new and you have the Stanley Park sea wall almost to yourself , this morning, if you’re lucky, you will share it with a stray coyote trotting home after a night hunt. As you move around the infamous wall, the mind-boggling scenery will unfold and amaze you as it has done to millions before you. The vastness of it will humble you. The arrogance of man, manifested in his phallic highrises and asphalt that is the urban hive, planted in the middle of all  natural beauty, is diminished. Nothing we build can compare to the majesty of our earth. The sea wall, early in the morning, can teach you that.

Hot sticky afternoon and the seawall is crammed with sweaty bodies draped with cameras and, distracted, they play bumper cars, a danger to themselves and others.

But not you, no you know that just off the wall is a wondrous secret world of trees and moss and cool moist air that will ease your sunburn and calm your nerves. The light is softened as it filters down through the trees, creating spotlights to show-off the many treasures of this world. Ferns, mushrooms, Douglas fir, Western Red cedar, Western Hemlock, and Sitka Spruce trees abound. Especially ferns, moving in the still air causing you to look for a passing fairy.

You stumble upon Beaver Lake which stands in stark contrast to the float planes crisscrossing above. You shake your head in wonder as you continue your exploration of this magical world a mere 15 minute walk from the nearest chilled chardonnay.

Wonderfully informative about the park – http://en.wikipedia.org/wiki/Stanley_Park

Map of the inside trails – http://vancouver.ca/files/cov/Stanley-Park-trails-map.pdf 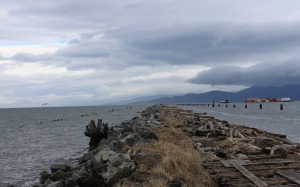 Out at the tip of Iona Beach spit.
photo credit: http://howsitgoing-eh.com

Out on the tip of the airport peninsula you will discover a world away from the urban hive.

Go past the sewage treatment plant (yeah, I know, weird eh?) and the Iona Spit Trail, park in the generous lot at the end of the road. The wild life preserve is on the right but walk through the washroom breeze-way and you come out into a wild and wooly beach that would not be out of place on the west coast of Vancouver Island. The slight finger of land juts out with the ocean on one side and the estuary of the Fraser on the other. The center is raised sand bluffs with scrub cover which hides a dumping ground for semi-trailers and the other side of the finger is used for log booms all of which adds to the gritty ambiance. 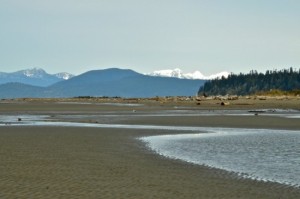 But back to the beach. Fabulously un-groomed, a haven for off-leash happiness, it is a favorite for urban dogs and their guardians craving some hard to find freedom. Being out here is surreal, the moody isolation feel coupled with planes of all sizes coming in for a landing over-head, silently gliding in as their shadow slides across the water.

The odd makeshift shelters and sculptures are created with logs and treasures washed up in storms. When the tide is out the beach becomes a mud flat that feels wondrous to hot bare feet.

I have even taken a lawn chair out with provisions well down the beach and spent the day reading and staring at the horizon. It was almost as good as a day at the spa. 🙂

If you don’t have a car you can always rent a bike downtown, hop on the Canada Line and get off at the Templeton Station and cycle in. 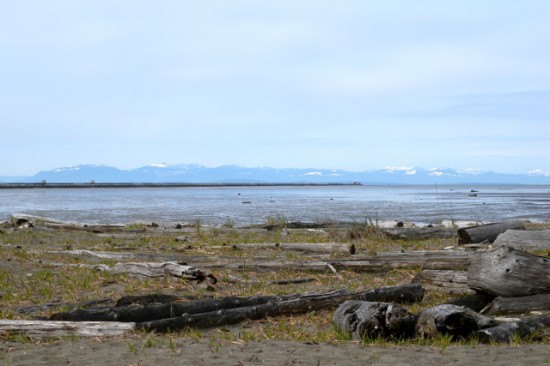 Page about the flora – http://www.geog.ubc.ca/richmond/city/IonaBeachRegionalParkandAdjacentSandspit.html

Information including routes to Iona – http://www.vancouvertrails.com/trails/iona-beach-regional-park

If you liked this article please feel free to hit the share button, thanks. 🙂