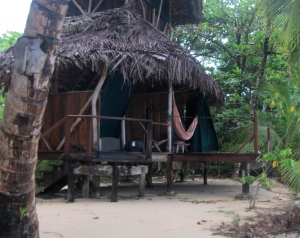 As you may recall from a previous posting, I had planned nothing for my last week. I wanted to give spontaneous a go since the first 5 weeks were pretty structured and you never know what gems you’ll hear about when you are on the ground. Puerto Viejo is so close to the Panama border there is a constant ebb & flow back and forth, especially since Bocus del Toro is such a fabulous place and a natural draw being the premier eco-tourism spot, brimming  with killer beaches, coral to die for and even waves that are described by those that know as “gnarly”. I also wanted a “no-brainer” where someone else took care of me all the way to the beach and after.

It couldn’t have been easier; a quick trip to Rockin J’s tour desk had the tourist bus booked which picked me up at my hotel and took care of me all the way through the border, dumping me out at Bocas Town.  After trolling the net (which was a freaking nightmare on the crappy netbook) I discovered Al Natural, a wonderful eco-resort on the island of Bastimentos in the Bocas del Toro archipelago. Not sure what attracted me… could have been the picture of the little cabin on the beach. But a few emails later it was booked. Call this puppy done and done.

Al Natural has an office ( and 2 stunning apartments for rent in town) in Bocas Town where I was to catch their boat to the resort. I had missed the first one so I had a few hours to explore, which I highly recommend. 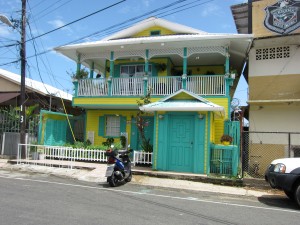 I doubt that I would have been all that interested in a longer stay but I enjoyed the time I did have. The town is colourful in its buildings and its people and being a tourist town means that it has a full array of restaurants and bars to tempt any tastes. Mine ran to coffee coffee coffee, which they need more of there.

As we were getting on the boat Michael (one of the owners) mentioned that there is no internet at the resort. silence. I checked to see if this was some Belgium humor. nope, no net. He gently reminded me that I wanted to relax. Yes but relax WITH the internet! As I got onto the boat I realized no one in the world knew where I was, that I would be off the grid for 1 week. Then the gorgeous green water, the blue sky, the wind  and the sun were in my face and nothing else mattered. I did make sure that I had access to coffee and wine before getting in, there was only so much “roughing” I was willing to take!

As you can see from the slide show, my cabin was amazing and the only thing I could have used was a mini-fridge and plug-ins. To re-charge my toys I had to take them up to the main building where they had a electronic closet set up.  I had my own little beach, literally at my doorstep. I fell asleep listening to the waves lap, very little pounding on my beach. During periods of monsoons, if the rain wasn’t being driven into the cabin I would leave the canvas curtains open so I could watch the storm.

I felt super safe, which was a good thing since the front of my cabin was completely open, no walls. There were canvas panels that I could pull shut but offered little security. This open air setup is not for every one, a young woman had such a hard time with it they cut their stay short. The staff (all locals) were amazing and did their upmost to make my stay as wonderful as possible; one night while we were eating a wild storm moved in and we just kept eating and drinking totally forgetting the open concept of our accommodations but the staff didn’t and they had moved quickly to close and secure the canvas panels to keep out the rain. Thoughtful. 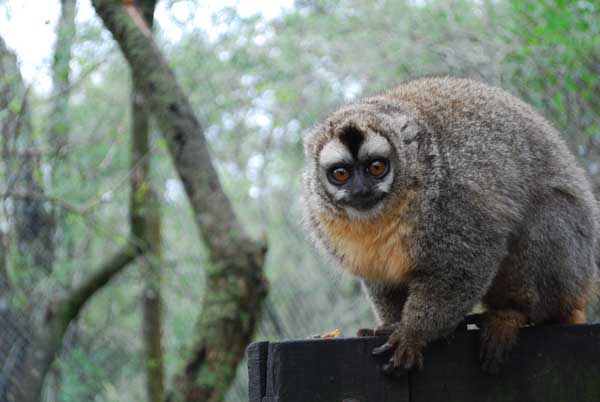 As a solo traveler it was an interesting experience (but really, which aren’t?). It was such an odd set-up, really. On one hand it was very romantic but then the communal dinners forced everyone to interact, which was good and bad. When the personalities gelled it was grand but when they didn’t- ick. Eventually another soloist arrived which was great and most of the couples were open and so fascinating; the young stock broker and his artist wife from France living in New York; the Spanish couple – doctor and artist; the middle aged, mid-west couple who I oddly connected with the most; the brass loud Ottawa woman who had been diagnosed with cancer who decided she needed to roam Panama sans husband and child; the Australian couple and their young child sailing around the world are but a few.  Thank the Goddess  there was only few that were almost rude in their attitudes. The language barriers were, well barriers when people don’t make the effort.  The set times for food and coffee I found annoying sometimes since I prefer to graze all day and it was a pain to have to ask for coffee outside those times. All that said, I did not regret my choice at all. I got to see a family of Night monkeys, the resort has a feeding station for them;

a caiman in the pools of water on my way back to my cabin one night, a turkey that was ridiculously gorgeous 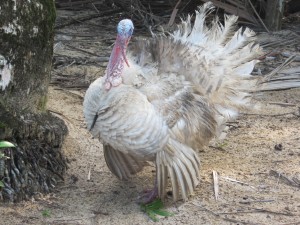 and breath-taking phosphorescent plankton that entertained with swaths of moving light… as if the Milky Way was underwater at the end of our pier, pools of amber coloured water that reflected the palms like an old sepia photo… 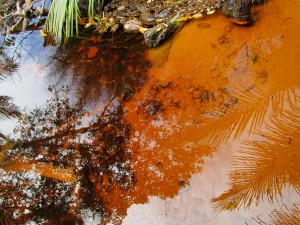 It was a mighty fine place to spend the last week of my trip and  it gave me time to digest the plethora  of experiences I had gorged on during the previous weeks.

So check out my slide show and please leave a comment here to let me know what you think. Thanks for coming by.

5 thoughts on “Chapter 4 (lordy this is as bad as the Lord of the Rings series!) Pretty Panama”