I decided to splurge for my last week and I was crystal clear about what  I wanted:

Now I hadn’t even considered Panama until some of the other volunteers were talking about it; including Poo and her friend Fiona went down for Poo’s visa and said it was great. Seems there is a regular migration by the backpack crew to Bocas Del Toro, a string of islands just south of the Costa Rican border and all in is only 4 hours and seemed simpler than any of my other options. There is a shuttle that literally gets you to and through the border, and then on to the water taxi to the main island of Bocas.

Bocas Town is what every tourist town should be – colourful, interesting architecture, characters, and funky restaurants. I had an hour till my shuttle to my resort  so got to explore a bit, buy some wine and chocolate, have lunch ( a divine anchovie pizza!) and find the best coffee shop in town (Italian). Fun.

The shuttle to my resort, Al Natural, took about 40 min. and there was just the captain, Michel – an owner – and I on board. The water was the most brillant turquoise I have ever seen; this is where the postcards are taken. Somewhere on our island is where one of the Survivors were filmed. That is on my to-do list… one that is very small I might add.

Al Natural is on the tip of the island of Bastimentos; the cabins are snugged into the edge of the jungle with a thin, fine sand beach in front. It is an eco-lodge and as such is committed to leaving as little a foot-print as possible. As few trees as possible were cut down, no lawns, (of course) the cabanas are powered by solar panels and any electronics needing charging is done at the restaurant/lounge useing their power converter system. The showers and sink water are from a tank of collected rain water and the drinking water is filtered rain water. They supply eco-friendly shampoo and conditioner and ask that you use them exclusively. Marsh water is pumped directly into an elevated holding tank for flushing the toilets. So they are definitely walking the talk.

Now my cabin. When Michel showed it to me I honestly almost cried. This is what I dream of when I dream of a Carebian vacation (sadly no nubile young thing was planted on my bed… ah well).

My cabana is on a platform literally on the edge of the water, during high tide the water is almost under it. Half of it is open to the sea so that when I woke this morning I opened my eyes and the first thing I saw was the ocean. Damn straight. It was funny because I had been dreaming this morning that I was here so that seconds before I opened my eyes, I thought I was still back at Playa Chiquita.

View from my bed

When I realized I was really here all I could do was lay there and grin and kick my legs in joy.

They feed me here, meaning I don’t need to forage for an open restaurant, ride my bike in the dark with my flashlight, then decide what I am going to have. All that is taken care of. The only decision is what I want to drink. Ah the stress. And so far the food is stunning, the fish are bought daily from the local fishers (not that silly importing them from the Pacific, eh Susann?). They make a coconut cookie that’s to die for! (I have since found out that they are actually store bought!) 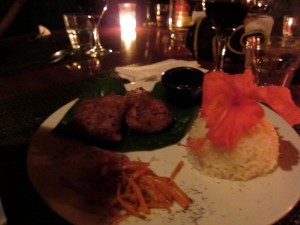 Michel (one of the owners) is Belgum and the couple that are currently here as guests are from Baste`; they all speak Spanish and French but the couple has only a little English though Michel is fluent. I am at the disadvantage since my Spanish is still tenuous and well my French is even worse. I can sometimes catch the drift of the conversation but talking is not going to happen right now. They do make an effort to include me but language can be tricky when the conversation drifts into controversial subjects like slavery. Yikes!  So that is a bit of a drawback since dinners are a communal affair. Sometimes I would rather quietly sit and read but it is a minor issue when all else is so wonderful.

There are tons of stuff to do though most cost money but I can swim either off the dock or on my little beach. There are gentle hiking trails to the other side of the island, which is much wilder since that is the exposed side while here we face into the other islands, which creates a much quieter water. Right now, my first full day I have little desire to do much of anything, maybe tomorrow I will go scuba diving or visit a village… I have books, computer (though no internet!), ocean and coffee … and coconut cookies = my happy place!

So I am home now, huddled at my computer, staring at these pictures wondering if it really happened. sigh. It ended up raining off and on for the last 3 days so it slightly dampened the experience; but it was still an amazing place – the food, the company and the peace easily made up for it. The place filled up with fascinating people from all over the world so conversation at dinner was never dull and there was always someone up for a walk between showers.