So my day starts with a cycle to work.. it is when I am the most connected to this place called Costa Rica. Not the only but definitly the most. The Pink Panther is not a speed demon so we aren’t breaking any records getting there and since it is about 7:20 am there aren’t a lot of tourists about. The locals are kind and we exchange morning greetings and a smile. The air is so balmy and the jungle noise has slide into the day shift, no one is in a hurry especially the dogs that have been so active all night. The hibicus is in full bloom and its brilliant red/oranges are amped up by the contrast of the mutitude of greens that crowd around them. And they make me smile, as I am sure they will for the rest of my life. Because you see they are the absolute favorite thing in the world to a baby sloth (other than its mom, ofcourse). When they grow up they will forget about them but for now it lights up their eyes and for those of us fortunate enough to know them, well we would willingly strip Costa Rica of hibiscus to see them happy.

Before I came I knew with certainty that the monkeys would play with my heart but those sloths snuck up and snuggled in and I am now a lifetime member of the baby sloth fan club. No day stays bad when you have one in your arms certainly not when Cuare (no idea of the spelling) is in charge of me, and I mean that literally. He is maybe 1/2 months old and has more spunk than anyone I have ever known. One of the biggest problems in introducing sloths back into the wild when they get older is that they haven’t had a mom to teach them how to climb high into the trees. This is important because that is really the only safe place for a sloth but the sloths that come to us don’t have the luxury of a mom. We can love and cuddle and make sure they have the best to eat but we just can’t teach them to climb high. Low yes. Everyday we take them to the bushes and dangle their little bodies close to a branch until instinct takes over and they curl their claws around a branch and away they go… some go more than others.

DJ is almost full grown and yet cannot be released since there is something not right with his back legs and when he finally gets into the bush there he stops, curls up and sleeps till we pluck him out to go to bed. At the other end of the spectrum is Cuare who seems to think he is a rabbit. To watch him “sprint” across the paddock you would think he is in training for the Iron Sloth competition. For hours I follow him around constantly picking him up and putting him back onto a branch. He is such a fearless little critter, pulling daring do’s that sloths much older would never attempt and I noticed that he actually goes up as well as horizontal, which none of the others will. So I thought what would he do on say the monkey mansion where the back is covered in chicken wire. Well this sucker is over 2 stories high and by the time I realized what was happening he was above my head! Crap! So I have to run for help and a ladder. Naraya scrambled up while we held on and she just got him before he went up on top of the roof! I was soooo proud of him, I can’t tell you. If anyone can make it, it will be him… if we can just keep him out of trouble till then. 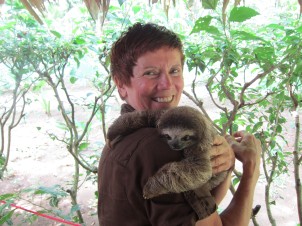