I go to bed early, especially if I start drinking gin early,  so by midnight I had been sleeping soundly for at least 3 hours. Rusty was tucked in beside me lightly snoring. I had my earplugs and eye-mask firmly in place. For once Stephanie’s monster Chin pack was quiet. Peace reigned supreme. 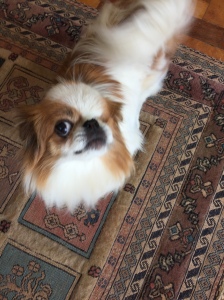 “I don’t do Chickens” Rusty

Until the chickens started screaming for their lives! The noise blasted through my earplugs like they were paper and I flapped from my bed, flailing in the bedclothes. I glanced over at Rusty and all I got was a slight head raise and a look clearly indicating that I could handle this one on my own.

I went dashing down the hallway to the back door screaming my head off, hoping I would scare off whatever was after the chicken. Fumbling with the keys to get both back doors unlocked, heart pounding like crazy – hard to think with the damn chickens screaming. I dash out to the chicken coop and start pounding on the wire… realized I had bare feet and no light. I wanted to know if whatever was after the fowl, decided a chubby Canadian had more meat on her bones than a hen did.  I dashed back in the house, got shoes and my phone and dashed out. Chicken and I still screaming.

By this time the flokati rug was awake and roaring their fury at not being part of whatever action was going on but since they were locked in the house they were of little help other than to raise the decible level a few notches. 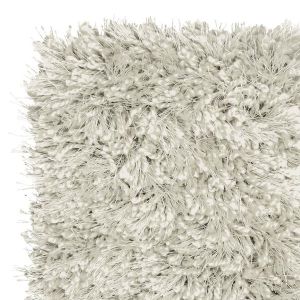 I shone the light on the huddled hen in the corner and swung it around looking for the predator. And there he was, hanging from the wire roof trying to chin-up himself out of this crazy house. He turned and looked me in the eye and my pounding heart did a hitch. Stretched out like he was, he almost reached the ground. It was a gorgeous Genet Cat!!!  So rarely seen because they are nocturnal and I get to see one in the middle of a huge city! I said I was sorry but I couldn’t let him eat Stephanie’s chickens, it would make her cry. So dude, no,  not on my watch!

Stephanie with the one that didn’t survive his genet attack! 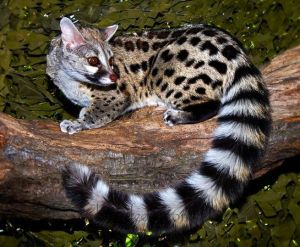 He hung there for a nano second and then pulled himself through a slit in the fencing and was gone leaving me awed and dealing with surging adrenaline.

I found the chicken he was after and went in and stroked her a little and told her she was ok now. She warbled a little and scooted away to find a hiding place.

It took a long time to get my nerves under control especially since the Chins were still howling their displeasure! Through it all Rusty and Stephanie slept through it all.

8 thoughts on “Chickens Screaming For Their Lives!!!!!!”