My birth days suck, it’s just how it rolls and I just try to deal the best I can. This birth day was supposed to be different cause I was going to cuddle baby monkeys all day and night. I didn’t and it wasn’t. I consoled myself with ½ bottle of Fat Bastard (wine, not a person). 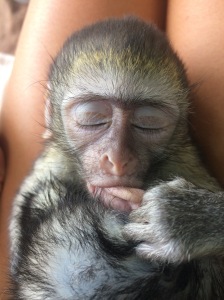 There was a ray of sunshine. Two wee babies arrived at the foundation Dec. 23rd, (that’s the sad part since it means her mom was dead cause they don’t give their babies up willingly).  The great part was, for a donation, I got to name the little girl! Sadly, I wasn’t able to hold her because I was sick.

Dana Lacroix while we were on the Wild Horse Safari in Alberta.

I named her Dana in memory of my dear friend who passed of cancer over a year ago. Dana was a fierce warrior for animals rights and she would have loved that a wee monkey in South Africa is named for her. This is little Dana’s story.

A security man for a mango farm in Levubu, Limpopo found Dana and Theo on a branch and brought them to the foundation on 23rd December 2016. . Teensy tiny, they were about 2-3 weeks old, all alone and crying with no sign of their troop. Can you imagine how terrified they were? Baby Vervets are never off their moms at this age so they were extremely traumatized. It is unknown how they were orphaned but the common reason in this area is their moms were shot.

It is testimony of the work that the foundation has done, and continues to do with the locals that at the very least many will at least bring the babies to them when they are found.
The alternatives –
– left to starve or be eaten by dogs or other predators.
– taken as a pet until they are so unmanageable they are put down. FYI – Vervets do not make good pets. period. There is a small window of manageable cuteness then all bets are off and they will make you rue the day you ever acted on that bad idea.They have such a complex social hierarchy etched on to their DNA that you have no prayer of figuring it out so you will continually blunder causing most of the chaos with your ignorance. Did you know the simple act of handing someone something will send them into a hysterical fit because they see it as an act of aggression which can cause a wave of violence to spend through the troop. Well neither did I till I handed the watering can to another volunteer. I gotta say I was real glad there was a fence between me and that Vervet!

Since Dana arrived she has been living with all the other orphans in Disneyland while she was learning how to drink from the baby bottles and how to use the feeding cages. From the moment she arrived she has had human staff dancing in attendance 24/7. Likely because they arrived together, Dana and Theo became extremely attached, like brother and sister. And like all sibling relationships there is love and there are fights and screaming and cooing. Harder on the volunteers than one the babies! 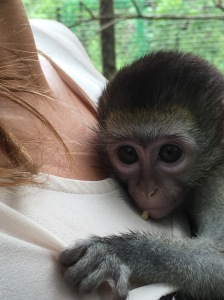 Because she is so clever she mastered the drinking cage like snap in just one month! The drinking cage is a small enclosure within the introcage that only babies can access that houses the feeding bottles. On the 23rd January, she was ready for the big move to the introcage at the Goliath troop to find her foster mum.  The introcage is a small enclosure that is attached to the large troop enclosure. It allows the troop and Dana to get to know each other in a secure way. The ladies who are interested will come over and check her out, do some grooming and discuss whether she would be good foster material. Then when a good candidate for foster mom shows up, she will be let in to see how things work out. Up to this point human volunteers were still a constant presence in her life but once it is time to let the foster mom candidates in, the humans move out… for good. There is screaming and terror the likes that would rip your heart out. Every maternal instinct I never knew I had screamed in reply and all I wanted to do was rip open that door and hold her. But that wouldn’t be good for her, not in the long run. Even after we leave the cage we are still there monitoring and keeping records to make sure that they will have the absolute best chance of success. So you will often come across huddled volunteers scribbling and watching, rain or sun. We are invested in giving the babies the chance to run wild in the woods, even if the enclosure is surrounded by electric fences. 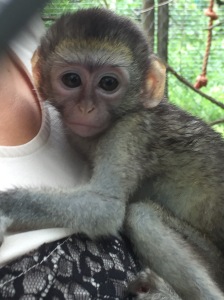 So Dana, Maggie-May (her new BFF) and Neville started their integration on 27th January. The beginning of the integration was difficult as she was really scared of the monkeys and ran away from them but slowly she calmed down. Then on the 29th she spent her first night in the introcage with Shortie, a possible foster mum. This is a big step for little Dana on her journey back to the wild, or at least as wild as possible. Since she went to the introcage, her human interaction has been decreasing to the point that, unless her life is endangered, she will never be touched by another human. Within days or even hours of being released into the big enclosure we will once again become something to fear and avoid… which is a good thing.

Footnotes:
1. What a lot of people don’t understand is that because we share so much DNA with monkeys and apes we can share a lot of the same diseases. When a baby monkey comes in they are so vulnerable to any rogue germs because their immune systems are so compromised because of shock and not having their mom’s milk.
back

One thought on “My Birth Day Present – meet Dana”