This is with the morning light, which is gorgeous in Antigua. 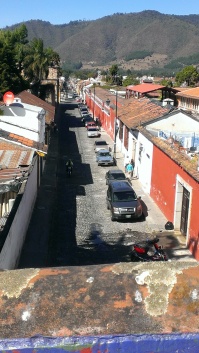 Most of the streets are like this, some, merely a little wider.

Old town Antigua is a mere 9 blocks by 9 blocks.  The cobble stoned streets challenge your ankles while the elevated sidewalks buck and split, threatening to toss you into traffic and certain doom as you gawk at architectural homages to the Christian God. Large groups of school children, yammering like murders of crows, swarm all they meet on this treacherous landscape. (Where the hell are they going anyway?)

Surrounded by volcanoes and verdant forests, the adrenalin junkies come to play. Tour agencies are as plentiful as coffee shops and everywhere you look  there is adventure for sale, accommodating all levels of courage and egos. Mount Pacaya blessed these warriors with eruptions in January so tour operators were in a feeding frenzy, luring people up her basalt shores with promises of roasting marshmallows on her lava. There are zip line operations that promise to combine thrills with extraordinary views through the forests; mountain bike tours, from a day to several days camping rough. Rivers to kayak/canoe/rubber raft/cycle on, in or through. Walking through town I could feel the electricity generated by risking life and limb for fun.

One of only a zillion churches.

Inevitably I got caught up in it (especially since the alternative was endless churches) and the next thing I knew I was signed up for Pacaya one day and zip lining the next. Yahoooo!

Too late to hook up with a mid-range company, I joined a bare boned tour with an Espanol-only guide in a beat up mini bus. When they picked me up at my casa and I opened the door,  my heart sank. The bus was jammed  with kids 1/3 my age. sigh. The head noise started up, yammering about not being able to keep up to them, worried I would hold them back, that they would resent me … blah blah blah. I just kept gobbling anti-nausea pills to offset the 3 hour twisty, stop/go road trip through Guatemala City rush hour and then into the mountains.

Suddenly we stopped so the driver and the guide could meet up with some other guys and start discussing something important. After all I’m sure they wouldn’t have kept us jammed in the bus for ages unless it was important, right? Finally they opened up the side doors so they could talk to us… in Spanish. Helpful. Some of the kids could speak 1/2 way decent Spanish so they translated for the rest of us. Basically we had a choice of going up the safe side or the lava side and they were trying to talk us into the safe side. We all said, hell no. They said well it will cost you an extra $20 each. Whatever. At that point I was so grateful for those kids cause if I had of gone with people my own age they would have likely have gone for the other side and I would have been stuck with safe.

Then after maybe 40 min. we got spit out and the march for lava was on. Without forethought we ended up on an afternoon/evening trek having no idea what amazing luck we had that we were. As we slid and rolled up the base of the mountain we kept straining to see the lava. We could see it but it was rather weak, not the dazzling show we were expecting but as the sun went down the lava’s inner light crept up until it was mesmerizing us with its glow. There was a layer of ash floating on top of it and the movement of the river would crack it open and the most intense red/orange I have ever seen would flash. The grey ash just made it seem all the more vivid. 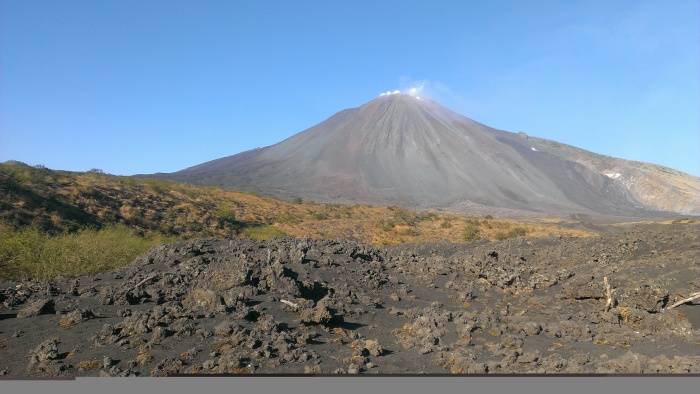 You can see the basaltic rock in the foreground and it got worse the closer we got. The lava river is coming down the right hand side of the cone where the dark shadow is laying.

Trekking up a volcano covered in basaltic rock which, being light and unstable, meant rolling and scrambling, threatening ankles and knees (what is it about this area with ankle threats?). All, of course, while going gradually but surely uphill. Determined not to be left behind I struggled to stay in the middle of the pack.

Armed and off-balanced, a dangerous combo.

As we caught up to the front of the group I realized our guard, a dark, brooding Latino, was handing over his gun (sorry have no idea what it was – just big, black and very heavy) for photo-ops. SHUT UP! This day was just getting better and better. I elbowed my way in and got someone to shoot (LOL) me posing with the gun. Now when I look back at the photos I do wonder what the hell I was thinking coming up those poses. I look off balance, both mentally and physically. Kindly, no one laughed. (In fact I seem to have forgotten everything I learnt about posing from America’s Next Top Model on this trip!) 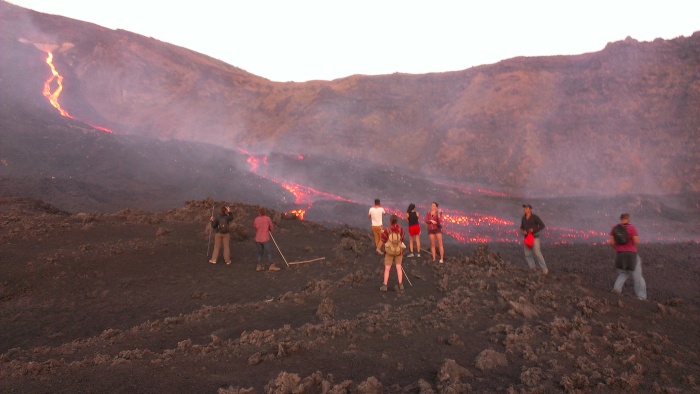 We got even closer.

When we got close enough we spread out and sat on the edge of an overhang,  just staring at the river of lava, mesmerized. A few went closer till their feet got too hot and then retreated. There was absolutely no safety talks (few would understand them if there was any), no “you can’t do that/wear a helmet/wear asbestos suits/steel-toed boots/hook up to a safety harness”. It was wonderful.

Too soon the guide was rounding us up and herding us down to the truck. I could barely tear myself away from the pulsing, shifting, brilliant glow of dangerous fluid. As dark descended and the stars came out it got harder and harder for me to focus on the treacherous hike down. I kept stopping and turning around gulping in the sight for all I was worth. It felt primal, the two ancient plates grinding till they partially melt, creating a soup of devastatingly dangerously beautifulness that spews out onto the surface. As a result of being hypnotized, I definitely brought up the rear, well after the guard, who showed no interest in making sure I was alright. In fact I had a clear feeling that if I were to stop and drop, he would keep going. Still, I was torn. Part of me, even now, wishes I could have spent the night up there. What helped motivate me down was the noise of a large animal unnervingly close. I scrambled to catch up.

This is how dark it was before I got to the truck! And all I had was my phone for a flashlight.

Piled into the back of the truck I managed to worm my way to the rear so I could continue to stare at the sky riddled with stars and the lava river flowing and glowing, visible for a very long time. The kids chatted away discussing past and future parties and where they were going next. In my happy place bubble the head noise was mercifully silent and my energy hummed me into a high.

On my return to Antigua, I picked up the makings for spaghetti and tomato sauce and wandered home. I actually managed to pull together a passing dish and had extra to share with my host, who gave it a 2 thumbs up. The rough outside kitchen, where I could still look up and see the stars, was a perfect place to end such a stellar day. Later, I fell asleep with the lava still flowing behind my eyelids.

I think the word is trussed. Ugh.

I shan’t bore you with much about the next day’s zip lining, it was not post worthy. Safe and secure, strapped in till I could barely move, the scenery flew by too fast to really enjoy, it was anti-climatic after the rush of the previous day. And the group? Well they were very nice, 1/2 my age and 3 x more careful. Most had to be talked into going on the zip line rather than the coffee tour. I’m guessing they would have chosen the safe option the day before. 🙂

An example of one of the many stunning views. I didn’t dare try to take a picture whilst zipping since dropping my phone would be dropping my camera, flashlight, alarm clock, watch and solitaire game as well. LOL

One thought on “Antigua, Guatemala – Charming and Active”