This woman is crazy! Seriously, has she not heard of relaxing and absorbing the ambiance of the place? Seems she is determined that we will literally walk every inch of this island and some of the other ones. And the bus rides! Thought for sure I would puke all over this energizer bunny. I just didn’t think I would need the motion sickness pills on a bus ride, for goodness sake. Good thing I love her.

We went to Stanley, a lovely little village reclaimed from an old jail for tourists, on Repulse Bay, on the south-east tip of HK island. And exactly on the opposite side of our hotel.  The middle of this island is a mountain and we had to drive over it and under it, but for some reason going to the village was not as harrowing as coming back to our side. We were in the middle of rush hour and the name of the game was a lot of stopping and going to go with the twists and turns.

Then there was Nathan road, which I look forward to seeing again since I pretty much missed it since I was a little preoccupied with my heaving stomach.

Eating @ night market, all I can say is thank gawd the beer was good.

The next night we went to a night market, gawd knows which one and I talked Carla into trying out the street food, to both our regret. Our bowel movements the next day were, well lets just say, interesting. gak.

My choice of the bright green back pack was absolutely the right one, Carla was able to spot me from blocks away so we were never separated long. I tried to get her to wear a Facinator but she would have none of it. 😦

While Hong Kong has never been on my bucket list, I am grateful that I get to be here at least once. And to have Carla to show me around is a bonus since she has spent a lot of time here. Hong Kong… a population of 7,071,600 (according to the World Bank 2011), all crammed around the outer edge of the island bristling with high rises, leaving the mountain in the middle an oasis of green. The mass transit system is amazing, why anyone would drive a car here is beyond me, other than as a status symbol. 🙂

Our hotel is great, few complaints ( you just know I couldn’t give them “no complaints), it’s the Ibis Hotel, which is a chain. It is in a very old part of HK but not that far from the glitz of Nathan road. If you’re interested check out my review on tripadvisor. 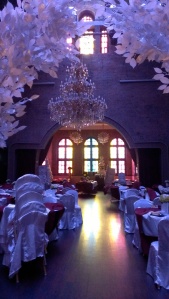 I do wish I had of had more time to explore this area, we found some facinating buildings when we crammed one more walk about before we caught took off for the airport.

So off to the next section of my adventure –  Thailand!