Maybe “fret” isn’t the right word… sounds too strong for what I’m getting at. But it will do until I think of a better one.

I think it is in upper mind due to a rough year of dealing with particularly virile viruses, to the tune of 20 sick days off work. So feeling vulnerable while here in the security of my nest has got me thinking about how I would do out there, you know in the wide blue yonder. That led to me remembering the worst “sick” trip I have ever had, Peru. It was the first big trip I had planned and executed and I managed to get sick 3 times and still consider it one of the best trips of my life.

At the train station, holding each other up.

The first bout was with altitude sickness in  Juliaca.  Since it was my first trip I can be forgiven to not taking notice of some relevant numbers.. like the fact that Lima is at sea level while Juliaca is 3,825 metres above sea level. To put it into perspective, Cusco is 3,400 metres while Machu Picchu is 2,430 metres . The reason I had us flying to  Juliaca and then  taking the train to Cusco was so we could climatize to avoid altitude sickness. Oops. To add to the hurt we would experience the next day was Pico sours and a heavy meal. Around 2 I started having nightmares, shakes, nausea and a screaming headache. I remember huddling in my bed thinking I was going through this alone and how was I going to deal with traveling the next day? Well poor K was going through her version in the next bed. 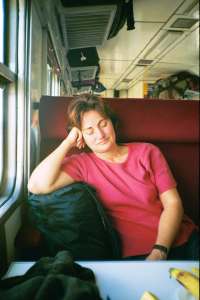 Trying to sleep it off.

In the morning after consuming cup after cup of cocoa tea (guaranteed to help) we managed somehow to make it to the railway station, change money and get on the beastly train. For the first few hours all we could do was cling to the table between us and whimper. Slowly we came out of the worse of it but having only access to french fries and bananas food didn’t help one little bit.

The second bout struck the night we arrived in Machu Picchu after 4 days of hiking. It had been an amazing time and I was so energized and high from the challenge, I was even going to climb Huayna Picchu the next day. Because of our amazing guide Juan we were able to camp the night on the grounds of a local restaurant, steps from Machu Picchu so we were even allowed to go back after dark and commune with the Inca ghosts… so cool. So I had no warning of what I was to endure. In the middle of the night I woke stricken once more with altitude sickness, really bad. In fact it made the first bout seem like a mild head cold. It was brutal. All I can do is thank the Goddess for Juan, who continued to take such good care of me even when I was no longer his responsibility and for K for all her sympathetic noises and support. Juan found me a bed in Aguas Calientes because we couldn’t catch our train until 4 pm and I simply wasn’t going to be able to be vertical in any way shape or form. Finally I felt strong enough to wobble my way to the station to wait for the train while K went shopping. Our goodbye shot with Juan is such a hoot.

Notice how happy Juan is to say goodbye... me (on right) still sick.

The third session was completely baffling and to this day I have no idea what the freak it was. We were at Sandoval Lake, a wonderful ecco-lodge well into the Amazon basin. It was our 2nd day and I woke with what felt like a full blown bronchitis which I used to have chronically when I smoked so I knew well the symptoms – elephant on the chest, weakness, lack of breath. I would have  felt true panic if I had of had the energy since I well knew that if it was bronchitis it would have me locked down for at least a week! But miracles of miracles before the day was done I was up feeling at least 75% and was able to go out onto the lake for the evening search for caymans.

So one would think that this would have cured me of traveling forever but no, far from it. Which begs the question – why. Likely has to do with one of the big reasons I travel, which is to challenge myself, to drag myself over my boundaries which I don’t usually do in my regular life. Out there it is like being thrown into the deep end and it’s sink or swim time. I got sick and survived it and in spite of all that still had a wonderful trip. So the difference will be in the future I will likely be alone, or not cause even when I’m traveling alone there are people around… often really good people. And travellers tend to take care of each other so while there are definitely no guarantees, I’ve got myself to a much better place than I was when I started this post. Thanks.

I’d love to hear about your “sick” days traveling and how you made it through.

4 thoughts on “Do you fret about getting sick while traveling?”